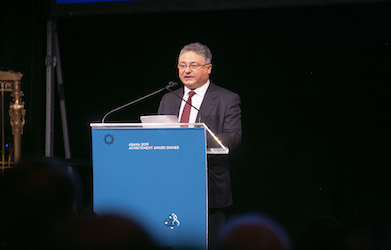 The Arab Bankers Association of North America last week honoured Farouk Bastaki, the head of the Kuwait Investment Authority, at a glittering dinner in New York. The crowd included recipients — and no doubt some would-be recipients — of riches from his sovereign wealth fund, one of the largest in the world. David Rubenstein, the co-founder of US buyout group Carlyle, served as master of ceremonies.

He suggested that when Mr Bastaki eventually retires, the KIA chief should consider establishing a private equity firm; answering, as Mr Rubenstein quipped, “the highest calling of mankind”. The celebrated Mr Bastaki has a different challenge in mind.

The KIA, the world’s oldest sovereign wealth fund, has derived most of the nearly $600bn it manages from Kuwait’s oil revenues. Mr Bastaki knows its history well, as the first managing director to be plucked from the ranks of the fund’s staff. But to the surprise of the audience, and no doubt some raised eyebrows from colleagues, Mr Bastaki chose to talk about the global need for Kuwait to reduce its carbon footprint.

He spoke about “One Planet”, a working group of sovereign wealth funds set up in 2017, which aims to integrate climate change risks into investment portfolios. Kuwait is one of the founding members. At its most recent meeting in the summer, eight fund managers with $15tn in combined assets signed up to the working group’s framework. Concern over climate change has become a big part of the investment landscape today. How investors think about infrastructure projects has converged with considerations over what environmental, social and governance-focused (ESG) investing involves.

Climate sustainability and resilience have moved to the forefront, becoming two of the hottest trends in the investment industry. Meanwhile, at its annual meetings which concluded just before the dinner in New York, the IMF included a chapter on sustainable finance in its global financial stability report for the first time. Climate-related risks and ESG finance dominated its policy agenda at the meetings.

Read the full article on the Financial Times website here.

Watch a video of Farouk A. Bastaki’s full speech here.