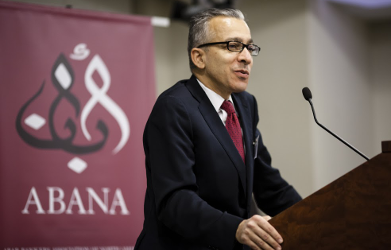 Dr. Bisat is a Managing Director at BlackRock, where he manages portfolios of Emerging Markets fixed income investments. Prior to that, Dr. Bisat was a partner at two macro hedge funds (Traxis and Rubicon) and held portfolio management positions at Morgan Stanley and UBS. From 1991-98, he was a senior economist at the International Monetary Fund. Dr. Bisat is also an adjunct professor of International Monetary Theory at Columbia University. He has served on the ABANA board of directors since 2010 and is beginning his second one-year term as president.

Also announced at the meeting were four new directors, each of whom was elected to a three-year term on the 20-person ABANA board:

The meeting was the culmination of a positive year for the Association, as summarized in year-end reports presented by ABANA President Amer Bisat, Vice President Sami Idliby, Assistant Treasurer Zineb Guessous and Treasurer Mohannad Aama. Among the highlights were:

Finally, Dr. Bisat and the members recognized the outstanding service of four two-term directors who stepped down from the ABANA board: