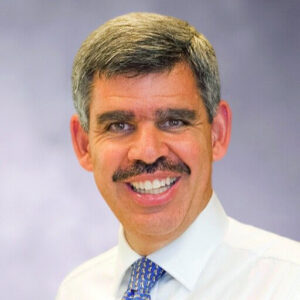 Dr. Mohamed A. El-Erian is the President of Queens’ College, Cambridge. He also serves as Chief Economic Advisor at Allianz, Chair of Gramercy Fund Management, and the Rene M. Kern Professor of Practice at The Wharton School of the University of Pennsylvania. He formerly served as Chief Executive and Co-Chief Investment Officer of PIMCO (2007-2014).

A columnist for Bloomberg Opinion and The Financial Times, he is a member of the Boards of Directors of Barclays, UnderArmour, and several non-profits. From December 2012 to January 2017, Dr. El-Erian chaired President Obama’s Global Development Council.

Prior to PIMCO, he was an international civil servant at the International Monetary Fund (IMF) in Washington DC for 15 years and, for two years, he served as President and CEO of Harvard Management Company, the entity that manages Harvard University’s endowment.

Dr. El-Erian was named to Foreign Policy’s list of “Top 100 Global Thinkers” for four years in a row, and he has published widely on international economic and financial topics. His 2008 book, When Markets Collide, was a New York Times and Wall Street Journal bestseller. That book won the Financial Times/Goldman Sachs “Business Book of the Year” and was named a book of the year by The Economist, as well as one of the best business books of all time by The Independent(UK). His 2016 book, The Only Game in Town: Central Banks, Instability and Avoiding the Next Collapse, was also a New York Times bestseller, and it was listed by Inc. as one the 25 Most Inspiring Books Everyone Should Read.

His most recent articles may be found on www.mohamedel-erian.com.