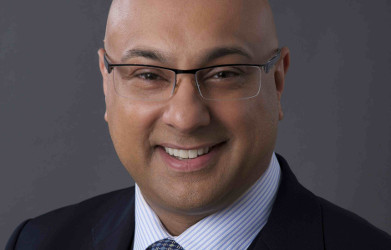 Ali Velshi was most recently the host of “Ali Velshi On Target” a nightly prime-time show on Al Jazeera America that spoke truth to power through debate, interview and on-the-ground reporting. Velshi has reported from the U.S. Presidential campaign trail, as well as covering ISIL and the Syrian refugee crisis from Turkey, the days leading up to the nuclear deal from Tehran, the tensions between Russia and NATO from Eastern Europe and the High Arctic, the debt crisis in Greece, and the funeral of Nelson Mandela in South Africa. He was previously the host of “Third Rail” & “Real Money with Ali Velshi” on Al Jazeera America.

In 2010, Velshi was honored with a National Headliner Award for Business & Consumer Reporting for “How The Wheels Came Off,” a special on the near collapse of the American auto industry. Additionally, CNN was nominated for a 2010 Emmy for Velshi’s breaking news coverage of the attempted terror attack by Umar Farouq Abdulmuttalab on Northwest flight 253 into Detroit.

Velshi has reported extensively on the global financial crisis; the struggles of Fannie Mae, Freddie Mac, AIG and Lehman Brothers; the U.S. government’s bailout plan; the battle over the fate of the American big three automakers; and the U.S. debt ceiling and budget debate. Known for his trademark exposition and explanation, Velshi appeared as a guest economics analyst on shows like “Oprah”, “The View”, and “The Daily Show with Jon Stewart” at the height of the global financial crisis, explaining the causes of the meltdown in plain terms.

Born in Nairobi and raised in Toronto, Velshi graduated from Queen’s University in Canada with a degree in Religion.  Velshi splits his time between New York City and Philadelphia. Active in the community, Velshi serves on the Board of Trustees of the X-Prize Foundation, Seeds of Peace, and the Chicago History Museum.  He volunteers with the New York’s Center for Urban Community Services homeless outreach program one morning per week.