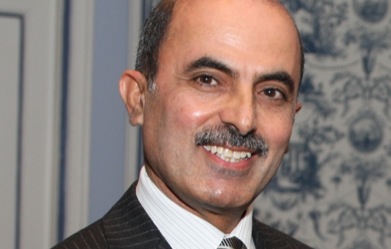 Abdul Aziz Abdullah Al-Ghurair is the Chief Executive Officer of MashreqBank.  He joined Mashreq in 1977, working in a progressive capacity till he acquired his leading post in the early 1990s.  He is also president of Al-Ghurair City, chairman of Masafi Mineral Water Company and director of Abdulla Al-Ghurair Group of Companies.  Mr. Al-Ghurair is on the board of the Dubai Chamber of Commerce and Industry, the Economic Council of Dubai and a member of the Governing Council of Dubai’s Higher Colleges of Technology.  In August of 2006, Mr. Al-Ghurair was appointed chairman of the Arab Business Angels Network.  In February of 2007, Mr. Al-Ghurair was elected as the Speaker and President of the UAE Federal National Council (the UAE Parliament).  Mr. Al-Ghurair, a native of the United Arab Emirates, holds a Bachelor’s in Engineering from California State Polytechnic University in the United States.

In the 1980s, Abdul Aziz Al-Ghurair came into the limelight as the man who was adamant about distinguishing MashreqBank and taking it to new levels of success.  Since then, he has adopted a carefully-planned strategy to realize this goal and made the bank one of the top banking institutions in the United Arab Emirates.

Abdul Aziz Al-Ghurair joined Mashreq in 1977 and, until 1988, held a number of roles within the bank.  During this decade, his responsibilities included assisting in opening branches in New York, London, Bahrain, Qatar, Egypt, India and Pakistan.  He was also put in charge of the bank’s international transactions.

During his more than three decades with Mashreq, Mr. Al-Ghurair has moved up the employment hierarchy assuming various positions.  His career planning was not haphazard.  It was the result of wise upbringing and guidance, which put him on a clear-cut path to success.  It was also the result of a full understanding of the true meaning of hard work as the means to realizing one’s goals.  Finally, it was the result of long years of experience, which have sharpened the intelligence and wit that characterize Abdul Aziz Al-Ghurair.

In 1989, Mr. Al-Ghurair was appointed director and became the CEO the next year.

In the following years, Mashreq continued to grow and increase its presence all over the UAE so as to offer all its clients high quality, prompt services.  Additional attention was given to the products offered by the bank to ensure that all its clients’ needs were met.  The bank also continued to strengthen its position as a pioneering bank by rolling out new products, services and technologies that became indispensable for its customers, such as traveler checks, insurance cards and ATMs.

The bank was the first in the UAE to offer commercial purchasing services (card acceptance) as it operates the largest network in the Middle East, which comprises of a large number of merchants using the bank’s most advanced and flexible electronic devices, installed at various transaction centers.  It is also one of few banks which offer e-commerce solutions for merchants willing to conduct their business electronically.

Since the bank’s inception as the country’s first private bank, it continued to play a leading role in the industrial sector, becoming the first to offer several banking products that became an integral part of people’s lives.  The bank has led the industrial sector in the UAE by providing finance services using the latest state-of-the-art technical solutions.  This has made it the largest private bank in the UAE as well as one of the most active banks in the field of corporate banking, treasury and investment.  Thus, Mashreq plays a major, active role in the country’s financial sector.

A fraction of Mashreq’s competitive edge can be attributed to the 47 branches it has widespread across the UAE and its plan to expand by launching an estimated ten new branches in the near future, to increase its proximity to clients in the country.  Some of this edge is also due to the ambitious plan to increase its branches abroad and extend its reach to new countries beside its existing branches in Bahrain, Qatar and Egypt.

In line with Mr. Al-Ghurair’s belief that employees play an important role in driving the bank forward and safeguarding its leading competitive position, Mashreq has adopted an employee-focused strategy.  On one occasion, Mr. Al-Ghurair demonstrated that he supported this strategy when he stated, “We at Mashreq believe that our employees are our partners.  Over 40 years we have learned that partnership is the foundation for leadership, and so we constantly ensure that we provide them with all the means that enable them to rise in their career to the highest positions.”
Under Abdul Aziz Al-Ghurair’s leadership, Mashreq has become a pioneering bank within the UAE market.

Mr. Al-Ghurair holds high academic qualification, gained from specializing in industrial engineering and earning an honorary degree from the Polytechnic University in California in the United States.