ABANA in the Boardroom with Laura Osman 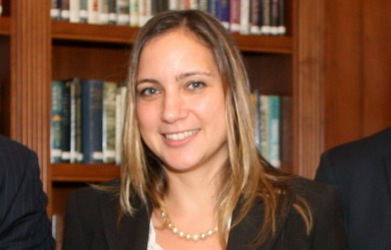 Laura Osman is a Partner and Managing Director of Concord International Investments Group, LP.  She is also the portfolio manager of the Concord Group’s international Egyptian public equity funds and a member of its Investment Committee.  She manages Egypt’s first closed-ended offshore fund, the Egypt Investment Company Limited, Egypt’s first open-ended country fund, the Egyptian Growth Investment Company Limited and Egypt’s only European Undertaking for Collective Investments (UCITS) fund, the Concord Egypt Fund.  These funds are listed in London, the Channel Islands and/or Dublin. The Egypt Investment Company was ranked as the top performing fund in the world over a 12 month period out of a universe of over 7,000 funds by Standard & Poors (as published in the International Herald Tribune) several times since October 2004. E-fundsresearch.com ranked the Concord Egypt Fund as the second highest performing fund for the first six months of 2005 out of a universe of over 8,000 funds.

Ms. Osman joined Concord in 1996, having spent the prior 6+ years in the Asset Management Division of Prudential Securities in New York.  Ms. Osman’s most recent post at Prudential Securities was as Vice President and Manager of the International Advisory Services Group.  She also founded and headed Prudential’s Portfolio Analytics Group and served as Systems Project Manager from 1990-1992.

Ms. Osman received a BBA in Marketing in 1989 and an MBA in International Finance in 1994 both with honours, from Baruch College, City University of New York.

Ms. Osman was the president of the Arab Bankers Association of North America (ABANA) from 2006 to 2008 and served on the ABANA Board from 2001 to 2008.  In addition, she serves on the Board of Governors of the Middle East Institute in Washington, DC and also sits on the Boards of Concord National (BVI) Limited, Concord Misr Investments (Guernsey) Limited, IT-Ventures-Concord Misr (BVI) Limited.   Ms. Osman was also a founding Board member of the ABANA Foundation.