ABANA in the Boardroom with Khaled El Ghorab 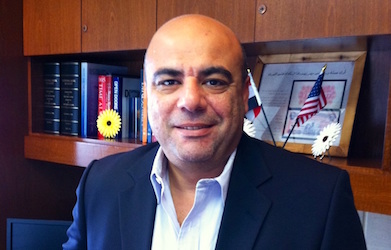 Khaled El Ghorab started working at the National Bank of Egypt in 1990, and joined the newly established New York branch in 2000. At the National Bank of Egypt New York, he worked in various positions mainly in the credit and risk departments, while moving up the ranks from Vice President to Senior Vice President and Deputy Manager (2004 – 2012) until appointed General Manager in 2012.

Mr. El Ghorab successfully turned around the New York Branch of the National Bank of Egypt – post global financial crisis and credit crunch of 2008 – 2009 – and turned the operations of the branch profitable in his first year (2012 – 2013) as General Manager.

He was appointed by the Chairman of the Bank to National Bank of Egypt’s delegation to the Institute of International Finance Conference in Washington D.C., and to meet with global financial institutions at the IMF and World Bank. Mr. El Ghorab also represented the Central Bank of Egypt and the Egyptian Ministries of Housing and Investments as a member of a panel at meetings held by the Consulate General of the Arab Republic of Egypt in New York and Washington D.C. for the Egyptian Minister of Immigration H.E. Nabila Makram with the Egyptian Communities in the United States.