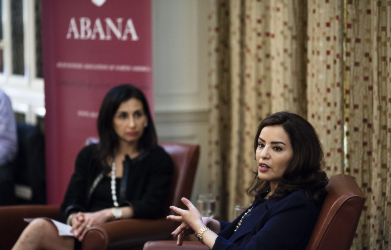 Maha K. Al-Ghunaim speaks with ABANA President Mona Aboelnaga Kanaan about investment banking trends in the GCC; Global Investment House’s recently announced 72% increase in revenue and its dramatic history over the past 17 years.

Maha Al-Ghunaim has built an admirable reputation for herself, one that extends beyond the Arab business community. After working several years for large financial institutions in Kuwait, Maha decided to establish an investment company that reflected her personality.

After graduating from San Francisco State University in 1982, Maha joined the Kuwait Foreign Trading Contracting and Investment Company (KFTCIC), the largest Kuwaiti investment banks. She began as a dealer in Marketable Securities, executing transactions, and then became a portfolio manager. In 1988 she became Vice President for Portfolio Management, a member of the asset allocation committee and a member of Al-Kharejeyah Umbrella Fund. In 1995 the Kuwait Investment Authority combined KFTCIC with Kuwait Investment Company (KIC) under the KIC name. Maha was appointed Assistant General Manager of asset management at KIC and was responsible for the local and international markets.

In 2008, Global, like many other financial institutions, was affected by the international financial crisis and particularly its prop book investments. The company had to go into a complete restructuring exercise and is today a debt free company, well capitalized for growth focusing on its fee based core business: asset management, investment banking and brokerage.

Maha’s success has drawn significant media attention. She has won a number of accolades including the “Banker Middle East Industry Award” for her outstanding contribution to the financial industry.” In September 2008, the Wall Street Journal named her number 43 on its list of 50 “Women to Watch.” Forbes (US) ranked her for three consecutive years as one of the World’s 100 most influential women, and Forbes (Arabic edition) ranked her second in its list of the Arab world’s 50 best businesswomen.