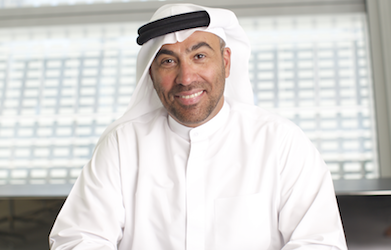 A PDF of His Excellency’s remarks is available here

The award recognizes an individual who exemplifies outstanding leadership in banking and finance and who has displayed a proven commitment to positive professional cooperation between the US and the Middle East and North Africa.

ABANA Chairperson Mona Aboelnaga Kanaan praised Ahmed Al Sayegh as “a true global leader who for over thirty years has played a transformational role in many of the United Arab Emirates’ most strategically important initiatives. Now, as Chairman of Abu Dhabi Global Market, he is building one of the world’s leading financial centers in the capital of the UAE.”

The ABANA Award Dinner has long been the premier U.S. event for the Arab and international finance industry. Held in New York City following the World Bank and IMF annual meetings, the event brought together hundreds of guests in celebration of an exemplary business leader.

H.E. Ahmed Ali Al Sayegh has a wealth of experience that spans over three decades. He holds several senior positions in a number of leading public and private institutions in Abu Dhabi, and has extensive experience with launching and developing pioneering initiatives.