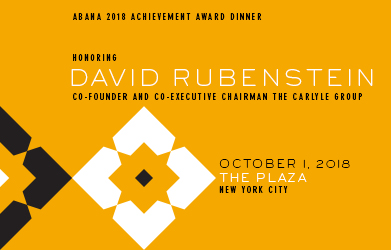 David M. Rubenstein, Co-Founder & Co-Executive Chairman of The Carlyle Group, is the 2018 recipient of the prestigious ABANA Achievement Award. The October 1st event will be held at The Plaza Hotel in New York City.

The award recognizes an individual who exemplifies outstanding leadership in banking and finance, and who has displayed a proven commitment to positive professional cooperation between the US and the Middle East and North Africa.

The ABANA Award Dinner has long been the premier U.S. event for the Arab and international finance industry. Held in New York City, in concurrence with the World Bank and IMF annual meetings, the event brings together hundreds of guests to celebrate an exemplary business leader.

David M. Rubenstein is a Co-Founder and Co-Executive Chairman of The Carlyle Group, one of the world’s largest private equity firms. Mr. Rubenstein co-founded the firm in 1987. Since then, Carlyle has grown into a firm managing $195 billion from 31 offices around the world.

From 1975-1976, he served as Chief Counsel to the U.S. Senate Judiciary Committee’s Subcommittee on Constitutional Amendments. From 1977-1981, during the Carter Administration, Mr. Rubenstein was Deputy Assistant to the President for Domestic Policy. After his White House service and before co-founding Carlyle, Mr. Rubenstein practiced law in Washington with Shaw, Pittman, Potts & Trowbridge (now Pillsbury Winthrop Shaw Pittman).

Mr. Rubenstein is Chairman of the Boards of Trustees of the John F. Kennedy Center for the Performing Arts, the Smithsonian Institution, and the Council on Foreign Relations; a Fellow of the Harvard Corporation; a Trustee of Brookings Institution, the National Gallery of Art, the University of Chicago, Memorial Sloan-Kettering Cancer Center, Johns Hopkins Medicine, Lincoln Center for the Performing Arts and the Institute for Advanced Study; and President of the Economic Club of Washington.

Mr. Rubenstein is a member of the American Academy of Arts and Sciences, the Business Council, Harvard Global Advisory Council (Chairman), Madison Council of the Library of Congress (Chairman), Board of Dean’s Advisors of the Business School at Harvard, Advisory Board of the School of Economics and Management at Tsinghua University, and Board of the World Economic Forum Global Shapers Community.

Join our list of sponsors! Click on the “Sponsorship” Tab at the top of this event page to learn more about sponsorship opportunities.