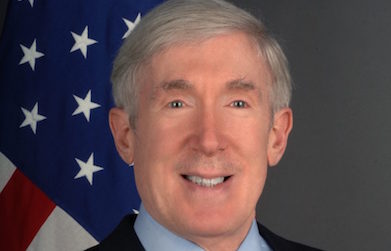 Robert Hormats is Vice Chairman of Kissinger Associates Inc. the New York based strategic international consulting firm that assesses and navigates emerging market geopolitical and macroeconomic risk for its clients. Previously Bob served as Under Secretary of State for Economic, Energy and Environmental Affairs from September 2009 to July 2013.

Before this Bob was vice chairman of Goldman Sachs (International) for 25 years. Earlier, Bob served as Assistant Secretary of State for Economic and Business Affairs from 1981 to 1982, Ambassador and Deputy U.S. Trade Representative from 1979 to 1981, and Senior Deputy Assistant Secretary for Economic and Business Affairs .He served as a senior staff member for International Economic Affairs on the National Security Council from 1969 to 1977, where he was senior economic advisor to Dr. Henry Kissinger, General Brent Scowcroft and Dr. Zbigniew Brzezinski.
Bob has worked extensively in Western Europe, China, India, Russia, the Middle East and South East Asia. His areas of expertise and experience include international trade and investment, intellectual property, foreign investment in the US, protection of trade secrets and global energy issues.

Bob has been a visiting lecturer at Princeton and served on the Board of Visitors of the Fletcher School of Law and Diplomacy and the Dean’s Council of the John F. Kennedy School of Government at Harvard. He is also a member of the Council on Foreign Relations and the Economic Club of New York.

Bob’s publications include The Price of Liberty: Paying for America's Wars from the Revolution to the War on Terror; Abraham Lincoln and the Global Economy.
Bob earned a BA from Tufts University in 1965, and an MA in 1966, and a PhD in 1970 International Economics from the Fletcher School of Law and Diplomacy.