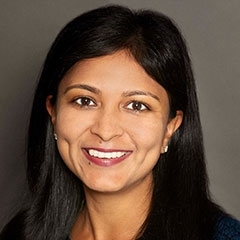 Pooja Goyal is a Partner and Chief Investment Officer of Carlyle’s Infrastructure Group, Co-Head of the Carlyle Global Infrastructure Opportunity Fund (CGI), and Head of Renewable and Sustainable Energy. She is based in New York.

Prior to joining Carlyle, Ms. Goyal was the Head of the Alternative Energy Investing Group at Goldman Sachs, where she led Goldman Sachs’ investments in the renewables sector. Ms. Goyal has been investing in the renewables sector since 2005 when she joined the Alternative Energy Investing Group as an associate. She was promoted to Managing Director in 2012 and took over as Head of the group in 2013. Under her leadership, the group built a portfolio of investments dedicated to the renewable energy and sustainable resources sector. The portfolio consisted of investments via debt, equity and tax equity instruments, ownership of assets and portfolios of assets.

As part of her role, Ms. Goyal has spoken at several industry conferences, including the Goldman Sachs Sustainable Finance Innovation Forum. She has held several board and committee positions including the boards of Vivint Solar and the American Council of Renewable Energy and the investment committees at Altus Power and Goldman Sachs’ Americas Special Situations Group. Prior to 2005, Ms. Goyal was part of the Investment Banking Division at Goldman Sachs.

Ms. Goyal is a graduate of University of Pennsylvania, where she received a BS in finance from the Wharton School and a BAS in computer and cognitive science from the School of Engineering and Applied Sciences.