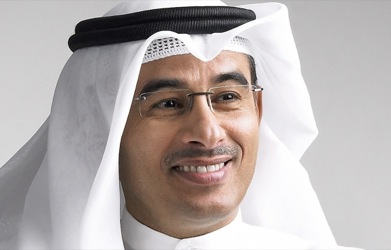 Mohamed Alabbar is one of the Middle East's most respected and recognized businessmen. The founder of Emaar Properties, the Middle East's leading property developer, Mr. Alabbar has been its chairman since its inception in July 1997.

He has been named "Middle East Personality of the Year" by FDi magazine and published by the Financial Times Group. In 2011, Arabian Business, the leading regional business magazine ranked him fifth in list of 'Power 500: The World's Most Influential Arabs,' and honored him as "Businessman of the Year."

He chairs Emaar MGF, the joint venture of Emaar and MGF Developments of India, rolling out the country's largest foreign direct investment in real estate. He is also the Chairman of RSH, the leading Singapore-based pan-Asian marketer, distributor and retailer of international fashion and lifestyle brands.

A global entrepreneur, Mr. Alabbar's business interests extend far beyond Emaar and property development. He is the founder and chairman of Africa Middle East Resources (AMER), a private company operating to unlock the value of natural resource opportunities in Africa, the Middle East, Central Asia and the Subcontinent.

He is the Chairman of Bahrain-based Al Salam Bank and sits on the board of Noor Investment Group, an affiliate of Dubai Group, the leading diversified financial company of Dubai Holding.

Mr. Alabbar is well-known for his pioneering role in positioning Dubai as a world-class city. He served as the founding Director General of the Dubai Department of Economic Development (DED), and as a member of the Dubai Executive Council and Dubai Economic Council.

Under Mr. Alabbar's guidance, the DED met with notable success in opening doors to the private sector, creating innovative public policies to strengthen trade and in establishing a business culture of transparency and openness. He was in the forefront in initiating the Dubai Quality Award and launching the Dubai Shopping Festival, both aimed at energizing the retail and tourism sectors of Dubai.

Mr. Alabbar graduated in Finance and Business Administration from the Seattle University in the US, where he holds an Honorary Doctorate and serves on the Board of Trustees.

Mr. Alabbar works closely with regional NGOs, and is especially committed to the cause of educational reform. A keen sportsman, he is an active member of the UAE's endurance horse racing community, and is the Chairman of the Golf Association which hosts the annual Dubai Desert Classic, the professional golf tournament that is part of the European Tour.