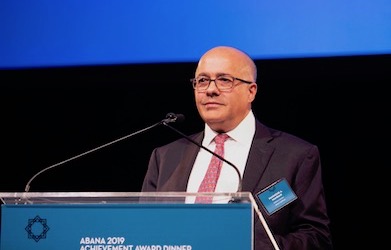 Mr. Mamdani started his career in the Middle East Group at Morgan Stanley in New York and has subsequently worked with clients from around the world for over 30 years on a variety of mergers and acquisitions, restructuring and corporate finance transactions. He has worked in New York and London, across a variety of specialty areas including Emerging Markets, Real Estate, Transportation, Financial Services and Activism.

Mr. Mamdani is a David Rockefeller Fellow and a life-member of the Council on Foreign Relations. He is an active participant in the New York City Investment Fund, a partnership between the city’s financial and business leaders to help foster economic development in New York City. He is also on the Board of Grameen America, the US affiliate of the Grameen Bank, the microfinance pioneer. He served on the Board of ABANA for over 9 where he was a Vice Chair and chaired the Governance and Search Committees.

He lives with his wife and son in New York City.