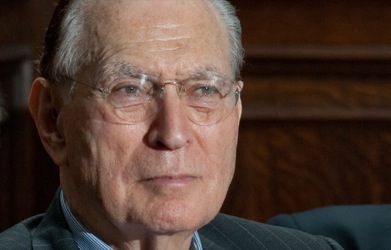 He was a trustee of the Educational Testing Service (SAT) from 1986-1993 and a trustee of the American University from 1985-1994. Mr. Loeb has served on seven Harvard visiting committees including the board of Overseers of Harvard College to visit the John F. Kennedy School of Government (1980-1986), and the board of Overseers of the Harvard College Committee to visit the Harvard Business School (1968-1979).

He was the U.S. ambassador to Denmark from 1981-1983 and a delegate to the 38th Session of the UN General Assembly. An advisor to Governor Nelson Rockefeller on Environmental and Economic Affairs from 1967-1970, he served as chairman of the Governor’s New York State Council of Environmental Advisors from 1970-1975. From 1954-1956, he served as 1st Lt. in the United States Air Force and was stationed at the Air Force’s Plant Representative Office in the Douglas Aircraft Co., Long Beach, California.

Among his awards and recognitions, Ambassador Loeb holds an honorary Doctorate of Laws from Georgetown University and has received the Justice Louis D. Brandeis Award. Ambassador Loeb has also received a knighthood from Queen Margrethe II of Denmark and a C.B.E. (Commander of the Order of the British Empire) bestowed by Queen Elizabeth II in 1994 for his work with the Winston Churchill Foundation of the United States. He is a member of the Society of Colonial Wars and the Sons of the American Revolution.