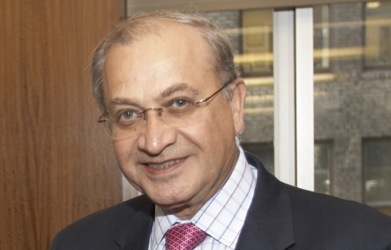 For over 30 years, Hani Findakly, an investment banker, has advised many governments, central banks, and international institutions in the fields of portfolio management, capital markets, and risk management. Over the years, he has also participated in a number of symposia on related subjects worldwide.

From 1990 to 1999, he was President of Potomac Babson Inc., an investment management firm in New York. From 1986-90, he held senior management positions on Wall Street, including PaineWebber Inc., as Managing Director of global risk management, and Drexel Burnham Lambert, as Head of the International Division with overall responsibility for managing the firm’s international subsidiaries in the US, Europe and Asia.

He joined Wall Street from the World Bank in Washington, DC, where he worked from 1975 to 1986. As Director of the Investment Department and Chief Investment Officer of the World Bank and its affiliates, he had overall management responsibility for the World Bank’s global investment portfolio of $25 billion in twenty international markets.

Between 1972 and 1975, Dr. Findakly served on the faculty of the Massachusetts Institute of Technology (MIT), where he did research and taught in the field of decision theory and systems analysis. In 1973, he was OAS Visiting Associate Professor at the Catholic University in Rio de Janeiro, Brazil, on leave from MIT.

Dr. Findakly serves on a number of academic and public interest boards, including, inter alia: the Middle East Institute (Governing Board, and, Chairman, Advisory Board); Harvard University Center for Middle East Studies (International Board); University of Maryland Sadat Chair for Peace and International Development (Selection Committee), along with several national and community boards.

From January 2000 to January 2003, he was President of the Arab Bankers Association of North America. His other international activities include the UNDP Steering Committee on Private Finance for Human Development, UN Summit on Financing for Development, and the Council on Foreign Relations Task Forces on the Balkans 2010 and Middle East Trade & Investments. As a member of the Council on Foreign Relations, Dr. Findakly has done extensive work and lectured worldwide on issues of international development, global capital markets, global investing, and financial risk management.