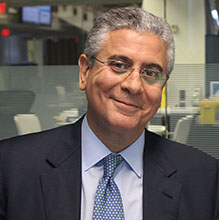 Ferid Belhaj has held the position of World Bank Vice President for Middle East and North Africa since 2018. Prior to this, Mr. Belhaj served 15 months as the Chief of Staff of the President of the World Bank Group.

From 2012 to 2017, Mr. Belhaj was World Bank Director for the Middle East, in charge of World Bank work programs in Lebanon, Syria, Jordan, Iraq and Iran, based in Beirut, Lebanon. In this capacity, he led the Bank engagement on the Syrian refugee crisis and its impact on the region, including the creation of new financing instruments to help countries hosting forcibly displaced people; the ramping up of the Bank drive towards the reconstruction and recovery of Iraq during and after the ISIS invasion and the scaling up of the Bank's commitments to Lebanon and Jordan.

Before taking up his Mashreq assignment, Mr. Belhaj served as World Bank Director for the Pacific Department (2009-2012), where he developed a regional strategy that scaled up Bank engagement in small and fragile states, and tripled lending operations of the International Development Agency, one of the five institutions under the umbrella of the World Bank Group that provides interest-free loans and grants for Low-Income Countries.

Mr. Belhaj, a Tunisian national, joined the Bank in 1996 as Senior Counsel in the Legal Department, managing a number of legal and judicial reform projects. He also served as Bank Counsel for countries, including Egypt, Morocco, Iran, Algeria and Thailand.