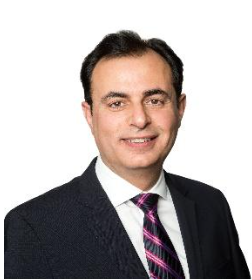 Dr. Kuran is an Arab-American investor, serial entrepreneur and a seasoned executive in the global semiconductor, power and cleantech sectors. He founded and ran several private companies and served as an executive/board member at eight public companies. His efforts are fueled by a vision for a peaceful world with universal access to clean and sustainable sources of food, energy and water. He led companies in the start-up stage and managed organizations generating revenue exceeding $1B. In cleantech, he founded and ran Petra Solar where he developed leading-edge technologies and launched the largest solar electric project in the world in 2009. He led the development and build-out of a major Smart City project in Bahrain, Solar and smart grid at Saudi Aramco’s headquarters and Smart Solar projects in Jordan. Currently, he serves as President and CEO of Power Edison and Executive Chairman of EV Edison, two companies he co-founded focused on providing energy storage and Electric Vehicle charging solutions. Power Edison built the world’s largest mobile battery storage system. EV Edison is building the US largest EV charging super hub located in Metropolitan New York. Dr. Kuran served as President of Advanced Solutions at SunEdison, the world’s largest renewable energy developer at the time and served as President of Strategic Development at NRG, the US largest independent power producer.

Dr. Kuran received the Dr. Raymond Jallow Lifetime Achievement Award by the American-Arab Anti-Discrimination Committee (ADC). He was named amongst the 10 Inspiring Arab-American Leaders To Watch In 2017 on the HuffPost Contributor platform. Greentech Media named him as one of the “100 people you must know in Smart Grid.” and was named by NJBIZ as one of “The 100 most powerful people in New Jersey business,” His company, Petra Solar was awarded the American Technology Award in both Smart Grid and Clean Tech. In 2010, E&Y recognized him as the NJ Green Tech Entrepreneur of the Year. He serves as an independent director on the boards of NN, Inc. and Laredo Petroleum with focus on ESG and on the energy transition strategy. He serves on the Advisory Boards of the Charles Edison Fund, the Edison Innovation Foundation and the boards of EnerKnol and New York Energy Week. Dr. Kuran holds a Ph.D. in EE from the CUNY and completed his Executive Management education at Harvard Business School. He is an inventor and has published over 40 papers.